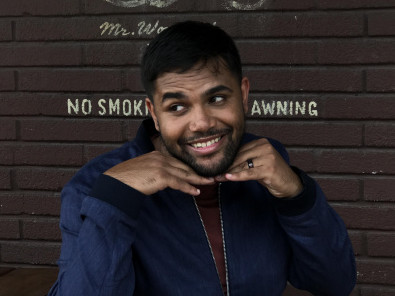 Jonny Bratsveen is comedian who taps into his biracial heritage/angst to bring entertainment to those who listen. Growing up bi-racial and constantly on the move Jonny's views on most subjects tend to not be so black and white. Starting at 21 and beginning his career at Cozzy’s Comedy Club in VA after getting out of the United States Air Force his mission now is to share his off-kilter view on the simplest of subjects with the world and make them laugh. He's been seen at the VA Beach “Funnybone”, “South Street Comedy Club” in Jackson Tennessee, "Memphis Comedy Festival" and "The Looney Bin" in Little Rock AR. With his tv debut on Comedy Central's Hart Of The City Season 2 under his belt he's ready to give the world a taste of what it's like to be Jonny Bratsveen. He's animated, energetic and most importantly kind of funny.